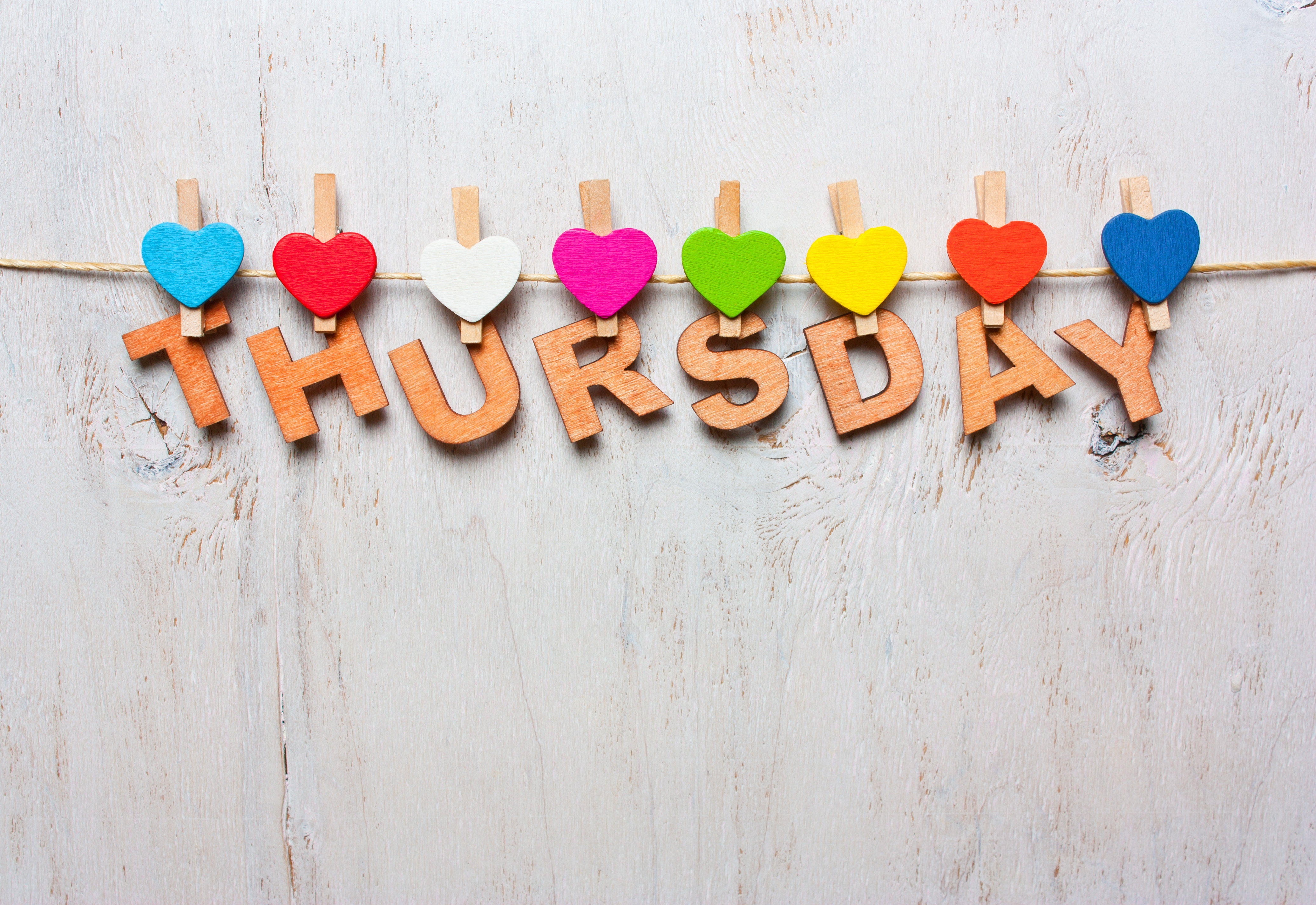 Monday is the quintessential downer, inspiring songs like ‘I don’t like Mondays’ by the Boomtown Rats and ‘Manic Monday’ by The Bangles.

According to Lynyrd Skynyrd, Tuesday’s gone.

Friday has a light side and a dark side with everything from Friday Night Lights to Friday the 13th and of course Black Friday.

Saturdays & Sundays are rich with positive associations like Saturday Night Live, Saturday Night Fever, Easter Sunday and then there’s the movie ‘Never on a Sunday’ featuring a free spirit prostitute.

So, what about Thursdays? Well, apart from it being the day the best writers in NWA gather to share their life stories, it’s the day on which Thanksgiving is held annually, it was the day of the Last Supper (Maundy Thursday) and Ascension Thursday.  And for those of us who were sitcom addicts in the 90s’s – it was the night NBC branded as ‘Must See TV’ and now ABC is in on the act with their TGIT.  Throwback Thursday (a response to Flashback Friday) caught on across social media platforms as a way of reliving past memories and sparking some happy vibes toward the end of the work week.

But for me, this day named after ‘Thor’, runs deeper.

First of all, it was the rather unusual day of the week that my husband and I got married.  We were determined to hold our wedding in September 2000 at Castle Ashby in Northamptonshire, but, being the popular venue that it was, dates were booked up years in advance (afterall, it’s a stunning 16th Century country house with gardens designed by the infamous Capability Brown and which played host to Queen Elizabeth I).  The only date available to us was the 14th of September, a Thursday, so, we just got over the weirdness of holding our big event on a weekday and grabbed the date.  As it turned out, the week of our wedding found the UK  in the midst of a fuel crisis caused by protests over rising costs of petroleum.  The protests led to blockades and the blockades led to widespread disruption to supply and runs on petrol stations resulting in a fuel shortage.  Literally, everyone was filling their vehicles up at the beginning of the week and running out of fuel by the weekend.  Suddenly (and for that particular week anyway) it turned out to be a brilliant idea to wed on a Thursday as folks’ tanks were empty by Friday leaving weekend weddings doomed.  Case in point, the musicians who performed at our wedding  simply didn’t have enough fuel to drive on to other weddings they were scheduled to perform at that weekend.

A few years later, with the arrival of our first granddaughter, Thursdays were to become our weekly babysitting day.  I can’t remember why it was our appointed day, but it soon became the most precious (and tiring) time of the week.  It was the day our lawn was magically transformed into the setting for a safari, a scene from the Wizard of Oz, a village, a café, a fun fair or a yard sale. And it was the day various rooms in our house were repurposed – the snug became a public library one week, a McDonald’s drive-thru the next and sometimes it was an innovative drive-thru library where you could get great deals on a burger and a book.  Bedrooms became schools, our kitchen became a disco, our living room was everything from a hospital to a dance floor and our hallway was of course, a fashion show runway. The little park in our village became Tinkerbell Forest and a nearby field with a hollowed-out tree was the residence of Pooh Bear and the scene for many a tea party. The local market town of Olney was part of our weekly ritual whether for a lunch date or a visit to the library and the toy shop where Granny’s budget of £5 to spend was regularly exceeded.  Our Thursdays always concluded with the inevitable scramble to get out the door in time to deliver the grandkids back to their mother and then return home to collapse in a heap.

Little did I realise at the time how special Thursdays would become to me.  Clients even blacked out Thursdays as the day that ‘Joni can’t do’. When our youngest granddaughter started school and I had to actually start giving Thursdays back to work, I felt such a hallow feeling come over me, as I realised just how richly packed those days were.

Thursday will be forever stamped on my heart as the best day of the week.